In the mid-1950s, when orchards and fields in the Los Altos and Mountain View area were quickly turning into suburbs and commercial enclaves, a group of physicians and concerned citizens banded together to establish a much needed community hospital. The few existing local hospitals were at capacity; hospitals to the north and south were badly overcrowded. The best and fairest way, they decided, was to form a hospital district and levy a tax so the cost would be shared over the population of the entire area. Voters overwhelmingly approved the formation of the District in 1956 by a 15 to 1 margin (only a two-third majority vote was necessary). The District boundaries encompassed the cities of Mountain View, Los Altos, Los Altos Hills, most of Sunnyvale and some unincorporated areas of Santa Clara County. The population at that time was approximately 150,000. According to the District charter, the purpose was to "establish, maintain and operate, or assist in operation of health facilities or health services at any location within or without the territorial limits of the District, for the benefit of the District and the people served by the District." 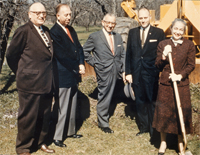 of Directors. Thereafter, Board members would be publicly elected every four years by voters in the District. Members of the original Board were Martin Spangler, Irene Pingree, Billy Russell and Carl Simpson. Their first decision was the selection of a 20-acre orchard on Grant Road in Mountain View as the site for the new hospital. Billy Russell, a local businessman and member of the board suggested the name "El Camino Hospital" because of the site's proximity to El Camino Real, the street that connected all the communities the hospital would serve.

In 1958, voters were again asked for their support for the new hospital, and again they overwhelmingly approved a $7.2 million general obligation (G.O.) bond that would provide the financing for the construction of the four-story hospital. At that election, voters also approved an M&O

(maintenance and operations) ongoing tax to assist in maintaining and operating the hospital.

Construction started on the original hospital in 1958; three years later, the hospital opened on September 1, 1961.

Vigorous growth in the area and the community's wholehearted embrace of the hospital resulted in the need for expansion. In 1964, voters approved a $3 million G.O. bond that would finance the addition of the 5th and 6th floors to the original hospital building. The project was completed in 1965.

In the early 1970s, the District Board of Directors designated that M&O taxes be used only for capital improvements, either to the building or for equipment. Taxes would not be used to support regular operations.

At the start of the 1990s, financial pressures and competitive forces were

bearing down on hospitals everywhere, leading El Camino Hospital to consider a fundamental change in its structure and operation. In December 1992, the District Board of Directors approved the formation of the hospital as a non-profit 501(c) (3) entity and voted to pass all the assets and operations of the former District hospital to the new organization. The District retained the land and leased the land to the 501(c) (3) for $50,000 a year, with increases based on the consumer price index.

As a result, the District sued the 501(c) (3) to regain control of the hospital. In December 1996, a settlement was reached between the District, Camino Medical Group and Camino Healthcare that would return the hospital back to District control.

In January 1997, the District regained control of the hospital, becoming the sole member in the 501(c) (3).

The District continued to receive the M&O taxes, as approved by the voters in 1958. Approximately $40 million in funds accumulated since 1997 were transferred to the hospital in 2006 in support of the construction of the replacement hospital.

In November 2003, voters in the District passed Measure D, a $148 million G.O. bond initiative to help fund the replacement hospital.

Since the District was still receiving M&O taxes, in 2008, the District Board voted to use the unrestricted portion of those taxes to annually fund community health improvement programs, in support of the hospital's community benefit responsibility. Since then, at the end of each fiscal year, approximately $5 million is transferred to El Camino Hospital for the management, coordination and disbursement of the funds for programs and partnerships that benefit the health and welfare of the communities in and around the District. 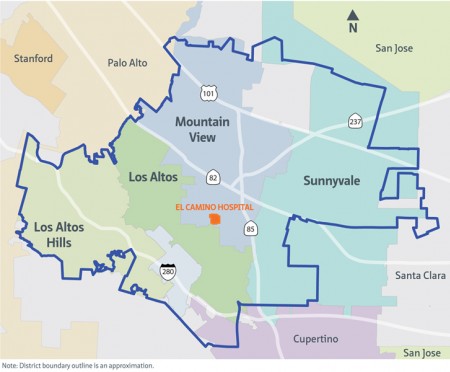 The ECHD is a member of the following organizations: 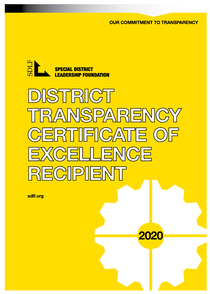